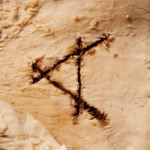 Needless to say, he missed his appointment the next day
And then declined to rearrange it to a more convenient date
He hoped this would act as penance for the way that he’d behaved
He hope that this decision to self-flagellate
Would help him on his way from early grave to pearly gates
He hoped the universe had some kind of divine order and shape
But who knows?
Who can say?